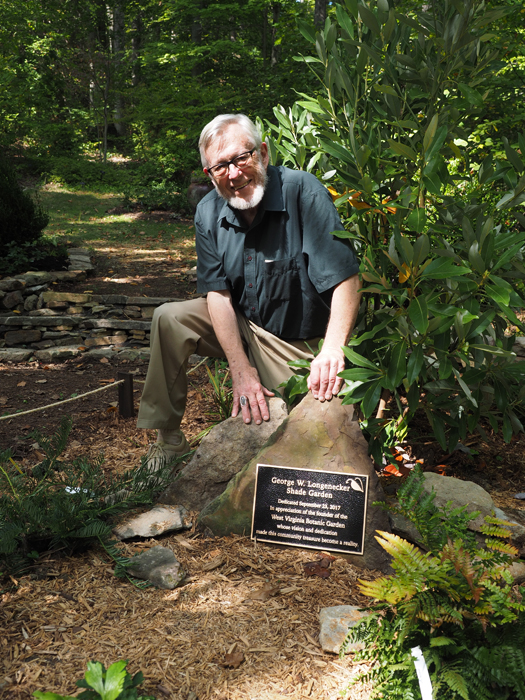 George W. Longenecker poses with the plaque naming the Shade Garden in his honor. 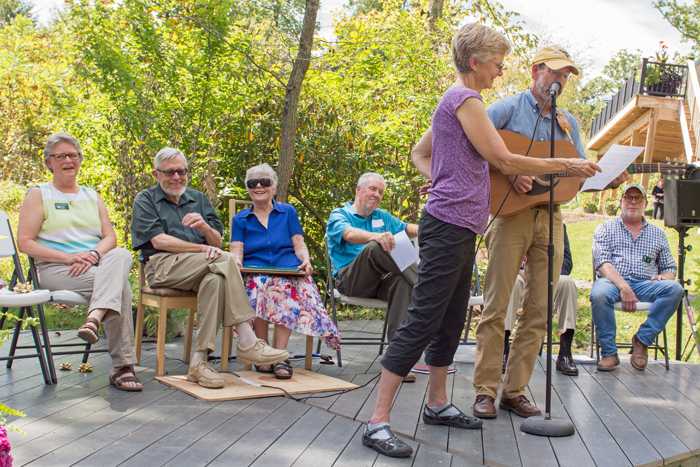 On September 23, 2017, the WVBG hosted an appreciation event in honor of long-time Executive Director, George W. Longenecker. George was the founder and driving force behind the Garden for more than 30 years. Under his leadership, the WVBG was incorporated as a non-profit tax exempt 501 (c)(3) charitable organization. After years of searching, a location for the Garden was finally identified—the land that had previously housed the Tibbs Run Reservoir.

In 2000, George began the grassroots effort to grow the Botanic Garden there and reenergized the organization needed to fund and to administer it. Since then roads, parking areas, and about five miles of trails have been constructed to connect the natural and designed garden areas. All the utilities and infrastructure for future development had to be brought down from Tyrone Road to the reservoir basin level. When this was accomplished, it enabled the WVBG to construct its first building, a solar-powered Welcome Center, which was completed in 2016. After all these years of dedicated service, George stepped down as Executive Director in 2016.

In recognition of his pivotal role in the development of the Garden, the WVBG named a garden that he designed and created in his honor. He also became a Life Director of the WVBG Board of Directors and received a key to the City of Morgantown from the Mayor, William Kawecki. Singer/songwriter Chris Haddox performed a song he had composed in George’s honor. A photo memory book was presented that highlighted a small sample of the many experiences that were shared with George over the years. Event guests expressed their gratitude to George and his wife Caryol as everyone enjoyed refreshments and a slideshow in the Welcome Center.

By Linda Bagby, Board Member

originally published in our Spring 2018 newsletter