Volunteers help clear wood in the area that would become the lower parking in 2005. 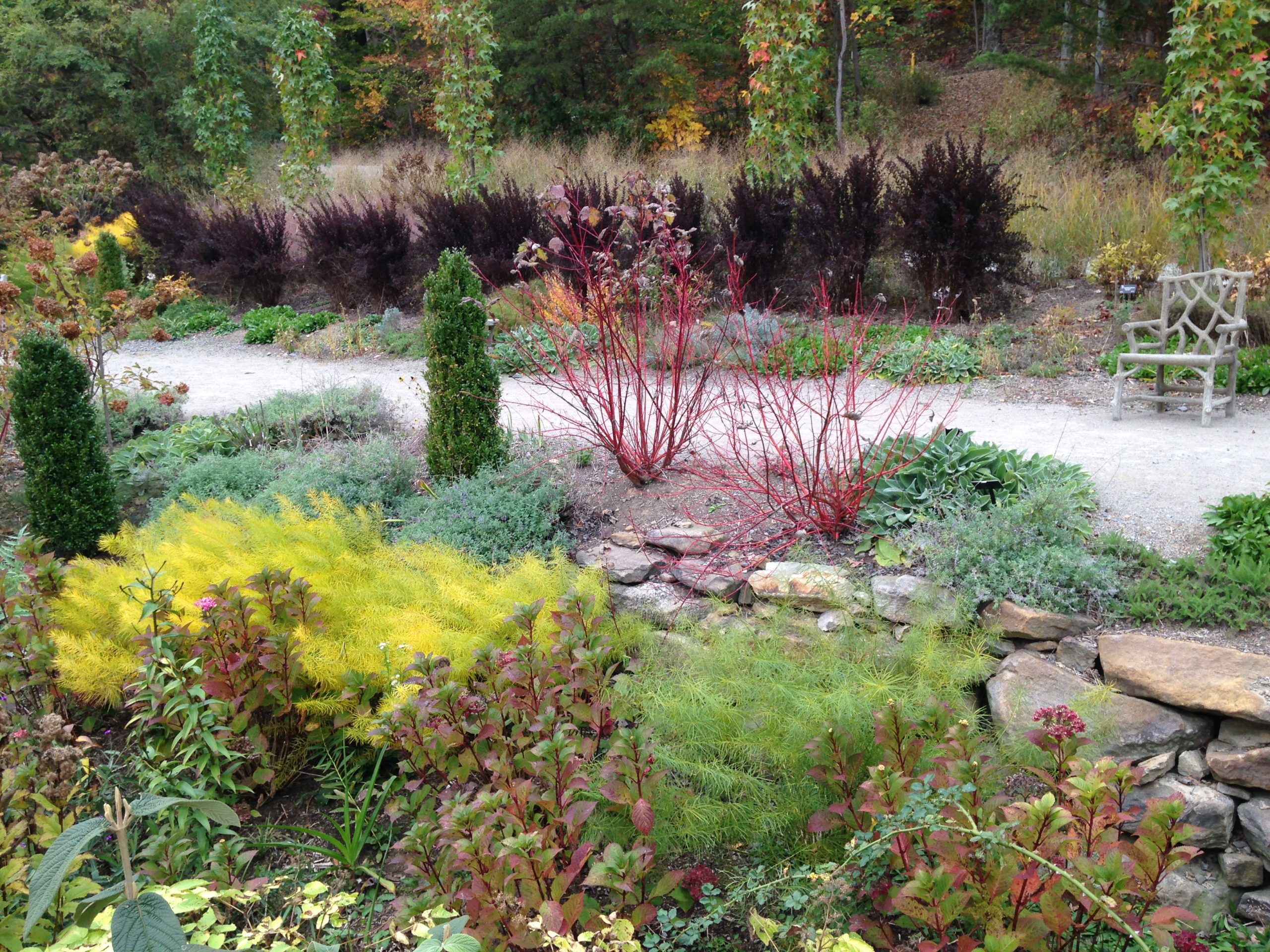 The Yagle Garden in fall viewed from the deck of the Education & Event Center.orge W. Longenecker poses with the plaque naming the Shade Garden in his honor.

It hardly seems possible that 20 years have passed since the West Virginia Botanic Garden, Inc. (WVBG) began the development of a botanic garden at the site of the former Tibbs Run reservoir. Prior to 2000, years of preparation had been done to register the organization as a corporation in WV and to achieve IRS tax exempt status. The search for a suitable home for a garden led to the naturally-beautiful Tibbs Run reservoir property and a lease agreement was signed with the City of Morgantown and the Municipal utility Board (MUB) in 1999. The WVBG officially took over the responsibility for the management of the 82-acre site on June 13, 2000.
The driving force behind the West Virginia Botanic Garden for most of these years was founder, George Longenecker, and many dedicated volunteers.

How the Garden has—literally—grown since then! In 2000 things were a lot different. There was no gravel road to the reservoir level, much less a parking area. There were only dirt trails to get around the site. There were no utilities at the reservoir level. There was no building and no restrooms. All equipment, supplies, and records were stored by volunteers. Meetings were held in homes or borrowed spaces. Unlike most botanic gardens, the land came with no endowment, so funds to do anything had to be raised.

The development of the WVBG has not only involved improvements to the site but has also required growth in WVBG’s organizational capacity to carry out the mission. To guide the development of the Garden’s site, a Master Plan was created by 2005. An update to the original Master Plan was needed in 2018 to address changes related to the required breach of the Tibbs Run dam and the acquisition of property along Tyrone Road. Major site enhancements have been made over the years that have provided access to fascinating features of the Garden and enabled future development. Some include: the road down the hill and the reservoir loop trail (2006); the wetland boardwalk (2010/11); the utility project which brought electric, gas, water, cable, and sewer from Tyrone Road (2013); and the Education and Event Center, including the first real restrooms (2016). Gardens have been added to provide color and texture and to address specific interests such as the Butterfly and Shade Gardens. Most recently, the Yagle Garden welcomes visitors to the Education and Event Center.

The educational program began in 2001 when the first mushroom walk was held and the program has been growing ever since. The WVBG’s first part-time employee, Education Director Erin Smaldone, was hired in 2009 and since then the public program options have grown and cover a wide variety of topics. In addition, young people learn about the environment through nature camps and school group programs and people of all ages participate in group tours and special events.

The WVBG has only been able to grow because of the generous support of the community. Volunteers have been vitally important over the years. Many individuals and groups including Eagle Scout candidates, the WVBG Garden Keepers, Wednesday Warriors and others have completed numerous projects and still take care of the Garden. The WVBG has always had a “working” Board of Directors who fulfill needed functions when there has not been enough staff to address everything. As budget allowed, an increasing number of part-time employees have been added. Not until 2016 was the Executive Director position expanded to full-time. The WVBG has been fortunate to have had such dedicated staff members who have strived to keep the Garden functioning and growing.

Financial backing from WVBG members and individual, organizational, governmental, and corporate donors has been instrumental in funding Garden operations. Grants have been and are still important in funding projects and programs. In early years the “Gardens of the Mon” tour of private gardens was a popular fundraising event; in more recent years, the Garden Party fundraisers and fundraising dinners have been fun ways for people to contribute.

The future is bright! Twenty years of hard work is bearing fruit. With increased financial and public support the West Virginia Botanic Garden can even more fully realize its mission to foster learning, inspiration, and well-being through the beauty and wonder of plants, the natural environment and culturally enriching experiences.

by Linda Bagby, Board Member

Originally published in our Spring 2020 newsletter