Put on your boots, and let’s go on a hike. Leaving our cars in the parking lot, we head for the wetland boardwalk. After passing over the wetland, we enter a mature, oak-dominated forest. The sound of a Pileated woodpecker (Hylatomus pileatus) searching for his next meal under the bark of a recently killed ash tree resonates throughout the forest. There is a pause…he likely has found an Emerald ash borer larvae (Agrilus planipennis) to enjoy. As we follow the trail, our eyes adjust to the dim light created by the dense Eastern hemlock (Tsuga canadensis) canopies above. Thickets of rhododendron (Rhododendron maximum) begin to appear as we approach Tibbs Run. Although we cannot yet see the water, we hear it as we follow the winding trail to the stream crossing. Looking up, we find ourselves surrounded by majestic Eastern hemlock, black birch (Betula lenta), and American beech (Fagus grandifolia; Photo 1) trees. 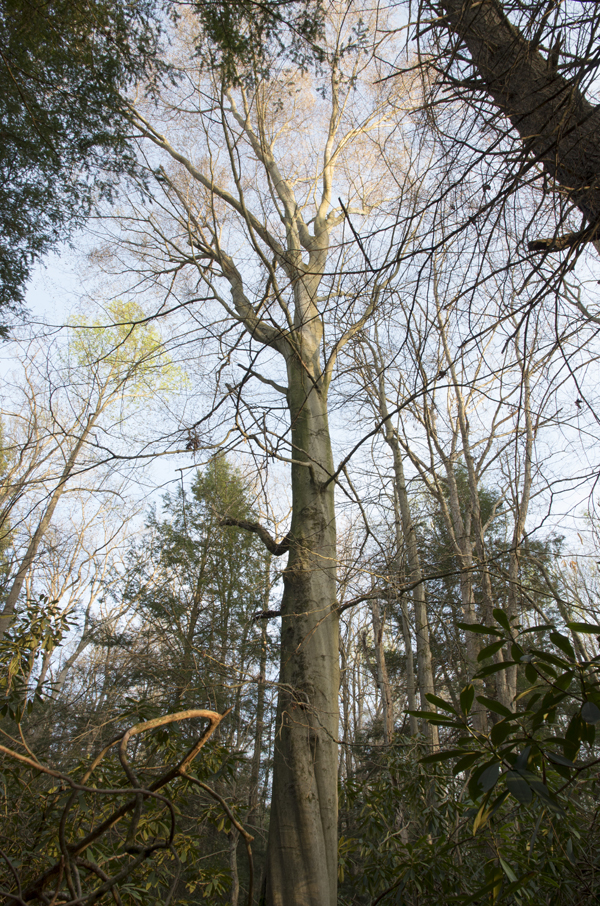 As we admire our surroundings, we notice something odd about the American beech trees. Where we expect to find smooth bark with the occasional proclamation of love engraved into its trunk, we instead find an abundance of cracks and depressions (Photo 2). White, cottony tufts, reminiscent of the hemlock woolly adelgid, can be found around the edges of these sunken lesions (Photo 3 and 4). In the centers of those lesions, tiny clusters of red grape-like structures have pushed their way through the bark (Photo 5). We begin to find more and more of these strange globular clusters along the entire trunk of the tree. A thought comes to mind… “oh no”. 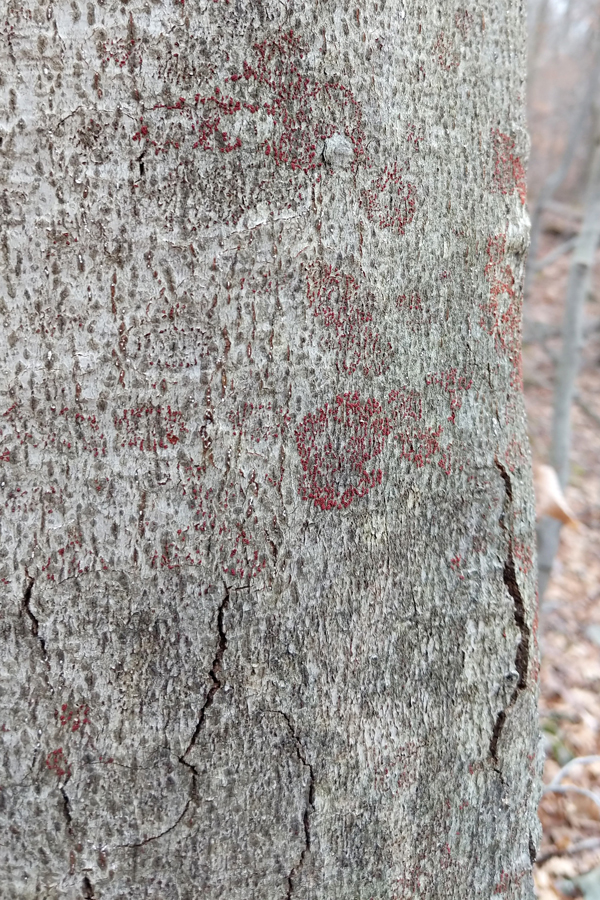 Photo 2. Disease symptoms associated with beech bark disease including cracking bark and limited depressions, which tend to get more pronounced over time. Additionally, red perithecia (sexual fruiting bodies) of the Neonectria fungi can be seen exuding from bark tissues, and a very limited number of the woolly beech scale can also be found. 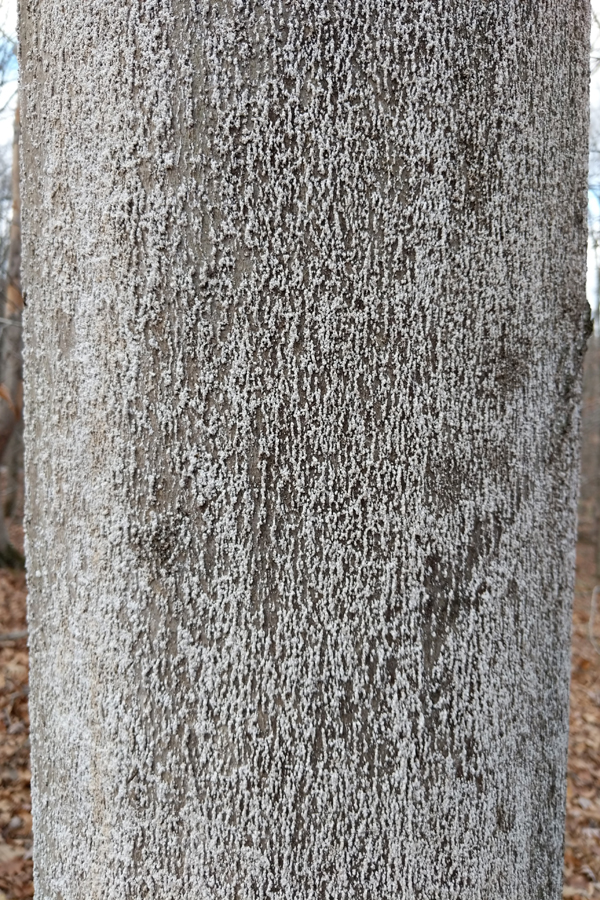 Photo 3. Heavy woolly beech scale (Cryptococcus fagisuga) infestation on American beech. As of July 2018, this level of infestation has not been observed at WVBG. 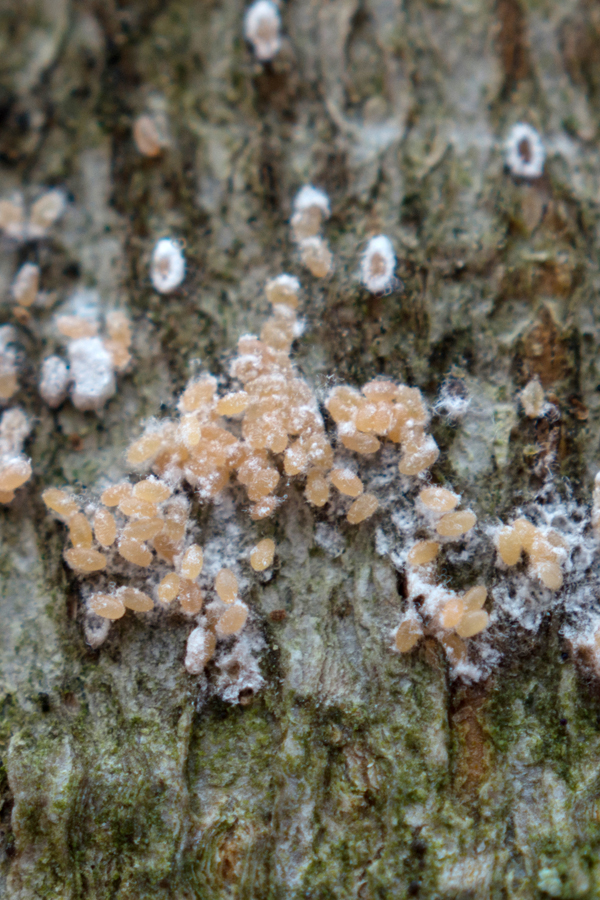 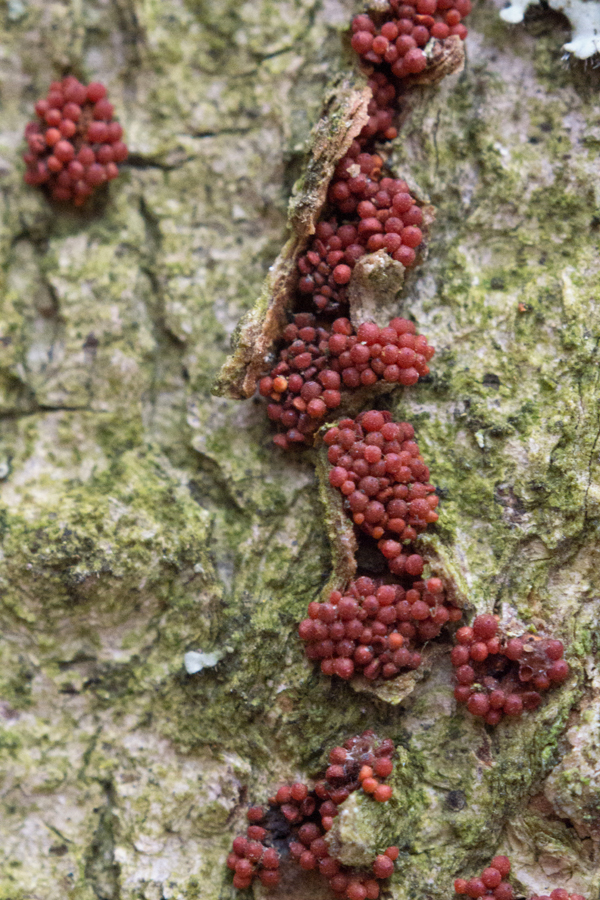 Maybe you have encountered this tree disease before, maybe you haven’t. Either way, beech bark disease has made its way to the West Virginia Botanic Garden. This disease is a complex comprised of several different organisms that play a role in a successional series of events. First, the exotic scale insect (Cryptococcus fagisuga) is carried by the wind or maybe even a hiker’s boots into a forested stand with beech trees. These small insects were first introduced in Nova Scotia around 1890 and have slowly been making their way south. Woolly beech scales are comprised of solely female individuals which require no male to reproduce, a phenomenon called parthenogenesis. In the next years, this scale population will explode as it increases in number and spreads to adjacent beech trees. Using a specialized piercing-sucking mouthpart called a stylet, these tiny insects feed off from the sap of the bark parenchyma and outer phloem tissues of the tree, which transport all of those hard-earned carbohydrates being produced through photosynthesis.

In response to the increasing scale infestation, the beech tree begins to defend itself by producing jasmonic acid to deter any insect herbivory. Unfortunately, this down-regulates the production of salicylic acid, which normally protects the tree from fungal pathogens. On the adjacent birch and maple trees, annual target cankers caused by the native fungus Neonectria ditissima also have small red, grape-like structures known as perithecia. These perithecia are the fruiting bodies of the fungus within which spores are produced and disseminated into the landscape to initiate new infections. Typically, the local beech trees are unaffected by the presence of N. ditissima, but after defending themselves from the beech scale infestation, the trees are now susceptible to such infections. This fungus begins to radially kill the beech’s living tissue surrounding the point of infection. Overtime, a second fungus (N. faginata) begins to create new infections, and even more sunken lesions arise all over the trunk of the tree. Then a number of other opportunistic pests and pathogens begin take up residence. With too many of these infections and secondary attacks, the host’s living tissue becomes fully compromised and the tree succumbs to the disease within as few as six years after the scale insect first infests the tree. As the tree dies, new shoots arise from the root system to create a beech thicket, but these shoots are equally susceptible to the scale and will eventually become victims to beech bark disease.

You may be asking, “Is there any hope?”, and fortunately, efforts to develop resistant beech varieties are underway. Approximately one-percent of the American beech occupying our eastern forests is considered resistant to scale infestation. Through this resistance to scale infestation, the disease is halted as it requires prior scale infestation to induce the susceptible state for invasive by the Neonectria fungi. Members of the United States Forest Service, as well as, a number of academic institutions are working diligently to further understand this long entrenched disease of American beech in hopes mediating its impact to conserve the natural state of our forests.