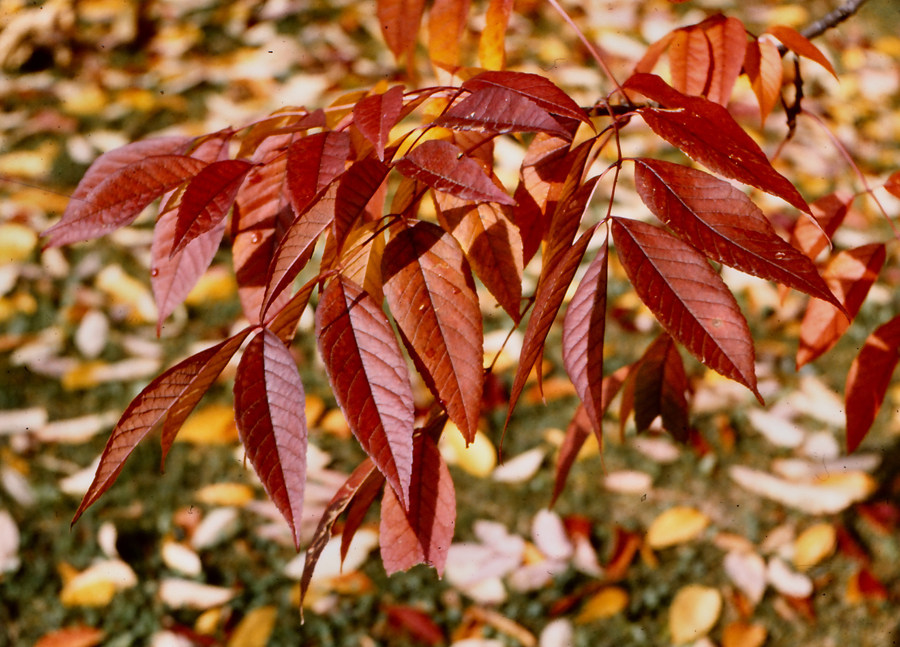 Ash trees are widely beloved for their upright vigor, their straightgrained and useful wood, and their variable fall color often
described as “bronze.” In Norse mythology, the first man arose from an ash, and an immense ash tree supports the universe and connects all its worlds.

Storied though they are, ashes seem to be defenseless against an exotic pest called the emerald ash borer, or EAB, a prolific insect that spreads with astonishing speed and kills infested trees. Each of the estimated 8.7 billion ash trees in the United States is at risk.

Native to eastern Asia, EAB was unknown in America until recently. Scientists investigating hundreds of dead ash trees in Michigan and nearby Ontario in 2002 found the cambium of dead trees riddled with galleries made by EAB larvae. These larvae had morphed into tiny green adults that chewed distinctive D-shaped exit holes when leaving tree trunks to fly around, nibble on ash leaves, and reproduce.

Efforts at EAB quarantine had little success because male and female adults both fly, storms may carry the insects for miles, and larvae may hitch rides in wood. Larvae probably first reached Michigan in packing crate wood from China. West Virginia’s first EABs (detected in 2007) may have traveled to Fayette County as larvae in firewood brought from Ohio or Michigan. To slow the spread of EAB and other destructive insects, the transport of firewood and logs is now restricted. However EAB is already known to occur in twenty-five states, from New Hampshire to Georgia to Colorado to Louisiana, and in more than thirty West Virginia counties.

The first verified presence of EAB in Monongalia County was at Coopers Rock in 2013. It showed up in Morgantown in 2014, and it has killed some local ashes as of this writing in October 2015. Of the two ash species common in north central West Virginia, EAB may attack green ash first, but it readily invades white ash too. Infested trees of both species may succumb quickly or die gradually over a period of a few years.

Ashes are uncommon at the WVBG, so visitors should not notice much change as the EAB scourge sweeps through the area. However ashes are common in nearby neighborhoods.

Saving individual trees is possible with effective treatment in the earliest stages of infestation. The best known treatment is injection of “TREE-age” (pronounced the same as “triage”), a systemic insecticide. Special certificationand apparatus are needed for this treatment that should be repeated every other year for now and every third year later. An arborist certified by the International Society of Arboriculture (ISA) is treating some ashes in our area, but treatment costs about $15 per trunk diameter inch. Homeowners should weigh the expense of repeated treatment against the benefits of trees and the cost of removal. Lower-priced treatment options have often failed.

Regrettably untreated ash trees may not be around for us to enjoy much longer. Other trees will fill the niche vacated by dying forest trees, and homeowners will plant different shade trees. For more information on EAB, see www.emeraldashborer.info

originally published in our Fall/Winter 2015 newsletter