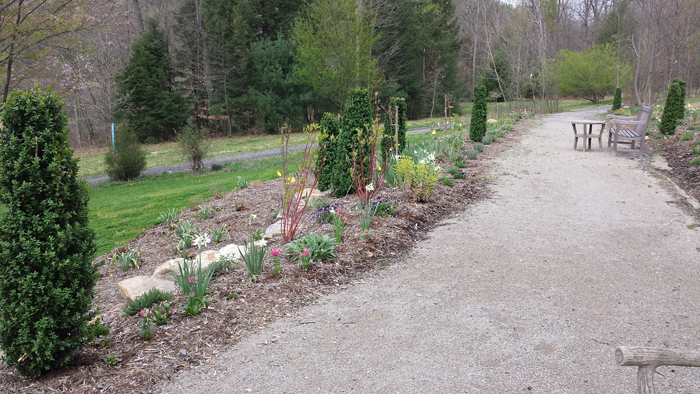 Buxus sempervirens, Common Box or Boxwood, is native to southern Europe, northern Africa, and western Asia. There are no boxwoods native to North America. Other common species are Buxus microphylla and Buxus var. koreana, Asian species. Other species and hybrids exist.

Buxus is probably best known for its use in formal gardens, both in America and Europe. It is the plant most commonly used to form the evergreen edges of parterres. I first fell in love with the species on a trip to Colonial Williamsburg when I was a child. I clearly remember walking into the formal gardens behind the Governor’s Mansion and being overwhelmed by the potent fragrance of Buxus. Many find it similar to cat urine, I find it heady like musk.

During my career as a garden designer, in my own personal garden, and here at the Botanic Garden, I treasure Buxus for its evergreen nature and the structure that exists twelve months of the year.

In my Charleston garden, which is relatively small, I have used eight varieties. In my “almost white garden,” Buxus sempervirens ‘Variegata’ create a circle around a small pond. The creamy variegation is a nice contrast to all the green plants. When there are white flowers in bloom, the variegation adds a subtle color echo, like lace. The white blooms start early in the spring; white Pansies, Helebores, Crocus, early, mid-season and late Tulips, Narcissus, Astilbe, Lilies, numerous Hydrangea, and the foliage of Ghost Ferns all come into play. A few Buxus sempervirens ‘Suffruticosa,’ more commonly known as English Boxwood, add their deep green rotund shape to the garden design as well. Exiting this garden, one steps along a narrow path that is bordered by Buxus sinicia var. insularis ‘Justin Brouwers,’ one of my all-time favorites for its very tiny leaves, slow rate of growth (two and one half foot spheres after fifteen years) and remarkable hardiness, even in heavy clay soils. The small delicate size of the leaf makes it unattractive to Boxwood Leaf Miner. Buxus sempervirens ‘Fastigiata,’ and ‘Dee Runk’ add their strongly pyramidal forms that create a background, as well as screening from the road beyond. A Buxus s. ‘Graham Blandy’ is a narrow columnar form that borders a gate leaving the garden. Buxus s. ‘Newport Blue’ forms a low hedge. This selection is noted for its blue-green foliage, especially when the growth is new. A hedge of the species borders the drive and has been sheared into a dragon. It forms the background for a narrow border of Tulips, Pansies, Daylily and Japanese Anemone, both single and double forms. These form the bones or structure of these garden spaces along with several other significant plants, with Juniperus rigida ‘Pendula’, a tree form of weeping Juniper and Poncirus trifoliata ‘Monstrosa’, the hardy Flying Dragon Orange, both playing important roles.

The Yagle Garden at the WVBG features Buxus s. ‘Fastigiata’. They add an evergreen vertical element to the overall design of the garden, making it an interesting space in all seasons.

There are many, many varieties and cultivars out there on the market. They come in about every shape and size you could want. Be very careful in your selection because what looks like a very cute plant in a pot can grow to become something you end up fighting with in the future. The dwarf or smaller growing selections tend to be quite costly because they take years to grow to a marketable size. If it is what you are looking for, they are worth the investment.
In the future the West Virginia Botanic Garden will feature other cultivars of Buxus. Some very promising varieties are being introduced and grown in our Mountain State.

originally published in our Fall/Winter 2017 newsletter 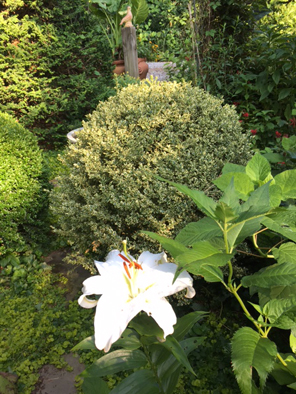