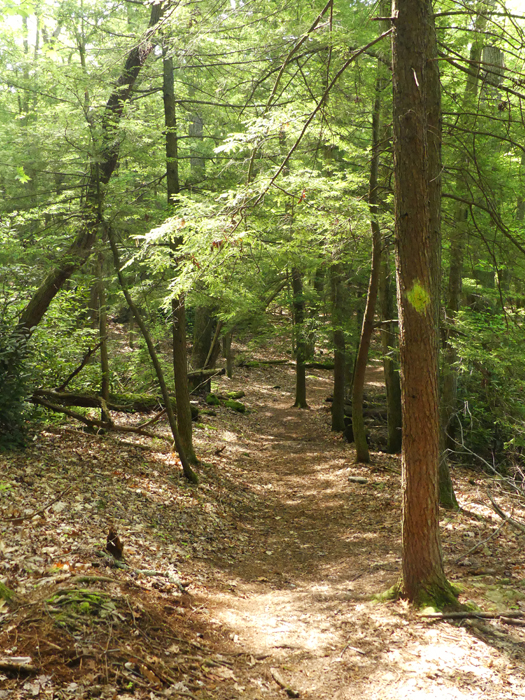 Canadian Hemlock line the Tibbs Run Trail at the WVBG.

When I was a young man I was lucky to spend time in the Catskill Mountain range at the home of a friend. It was a magical place with a stone-lined trout pond just beyond the doors of the kitchen, and wide meadows that opened onto the Neversink River. It was a short walk from the charming village of Claryville, N.Y. The hill behind this farmhouse was a very mysterious place, a dense Hemlock forest, deeply shaded by these majestic trees and with a thick carpet of needles. I always took my shoes off to experience the softness underfoot. The forest was so dense and shaded that there was barely any ground cover or understory. This forest made the
species Tsuga canadensis dear to my heart.

Now I live on the edge of the West Virginia Botanic Garden and find myself reunited with the species. Almost every day I walk the woodland trails with the company of my Briard, Steve, and marvel at the giant Hemlock that grow there. Some are quite old, 250 years or more. In the winter they hold snowfall on their layered branches as do their neighbors the Rhododendron. They thrive in the shade created by this mixed metaphysic forest, and the moisture of their northern facing slope. The ground is filled with many species of moss and large patches of Lycopodium obscurum, a club moss.

The species, also known as Eastern Hemlock, is often planted as a hedge as it will adapt well to shade conditions and can handle shearing. Most people do not realize that it wants to grow into a tree of possibly seventy-five feet and that they will be fighting it for its entire life. I have a pair in a woodland garden that I have sheared into tall wedding-cake-like topiary. They are a bit of a formal note as you enter the world or random woodland chaos.

There are dozens of cultivars of this species. I have several growing in my Charleston garden and hope to introduce many to the West Virginia Botanic Garden. ‘Cole’s Prostrate’ was originally found in New Hampshire and is a very slow-growing form that hugs the ground. The branches become muscular and show through the carpet of fine green needles. This is a very choice plant. ‘Cappy’s Choice’ is a weeping form that has grown to about eight feet in height and is fifteen feet wide. Its needles are smaller than those of the species, and its elegant form has branches that descend to the ground. ‘Gentsch White’ is often touted as a dwarf though mine are well over my own height. Their new growth is frosted white. It can be a great pairing with white spring bulbs planted close by. I have sheared a couple into topiary as my way of size control. My favorite is a plant that I remember seeing on the grounds of several old estates that I would sneak into in my youth: Tsuga canadensis ‘pendula’ or ‘Sargentii’, Sargent’s Weeping Hemlock. The specimen that grows in my garden weeps over a walk up to the woodland garden. I enjoy being beneath its canopy, which is often home to a Cardinal or a Robin.

The species Tsuga canadensis is under duress from the Hemlock Woolly Adelgid, an insect species mistakenly introduced into the U.S. from Eastern Asia in the 1920s. In some areas the species has been wiped out entirely. The forest in the Garden has been treated with Imidacloprid with great success. Cold winters set the pest population back as well. It is very sad to see a species under duress, knowing that its loss will change much in the eastern forest, including the shade it casts on streams, keeping them cool for trout. Growing them in the garden setting may be how we keep this gene pool alive.

Tsuga canadensis is a species worth exploring and promoting. Its beauty is unique, its profile outstanding twelve months of the year.

originally published in our Summer 2017 newsletter