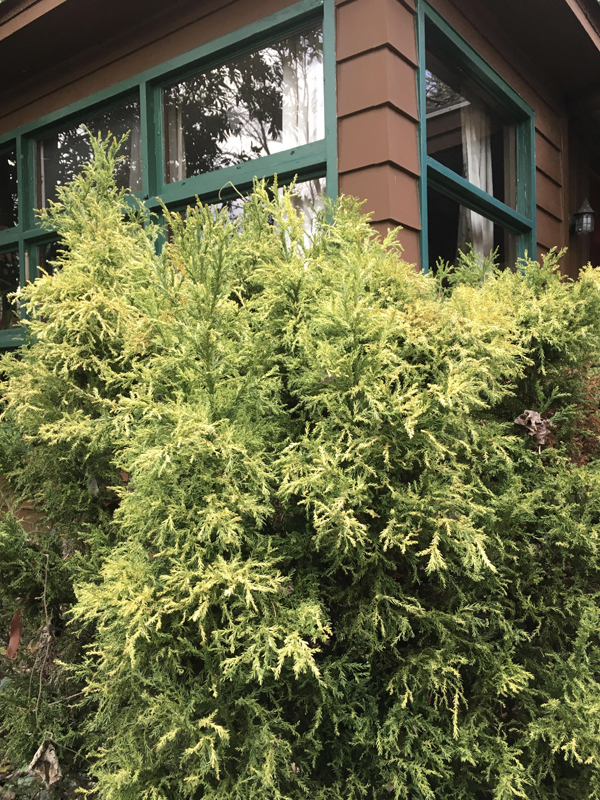 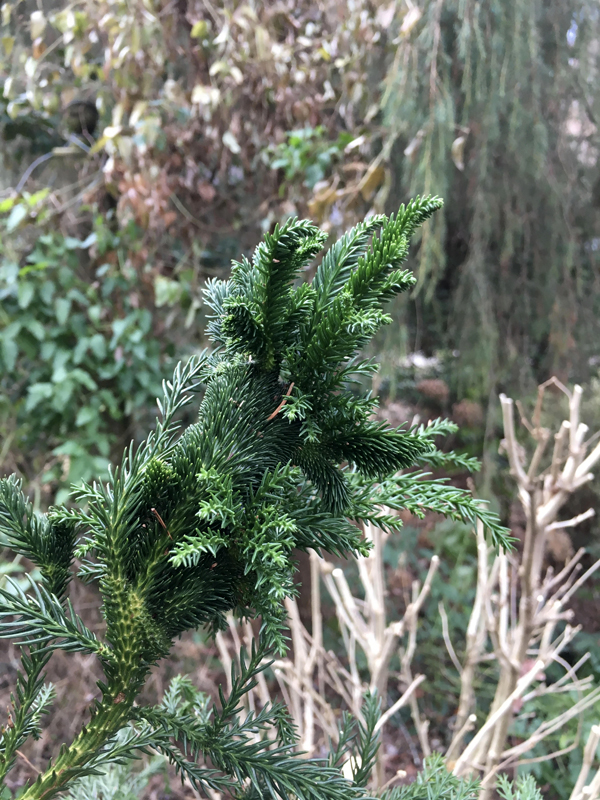 Cryptomeria (literally “hidden parts”) is a monotypic genus of conifer in the cypressfamily, Cupressaceae, formerly belonging to the family Taxodiaceae. The plant is endemic to Japan where it is known as Sugi.

Some thirty years ago I became enamored with this species. With an inquisitive eye, I was looking around in a series of propagating houses that the Monroe family had in Talcott, West Virginia. There were many quirky plants to be seen, especially cultivars of Tsuga canadensis, our native Canadian Hemlock. Most of the plants were growing in one gallon pots. Immature, they did not show their true form, but you could tell they were unique. In one house I found an evergreen that I was not familiar with. I asked Jim Monroe and he introduced me to Cryptomeria. The one in my hand was a cultivar known as ‘Yoshino’. I purchased it and it is now some fifty feet in height, with handsome exfoliating bark.

The cultivar ‘Yoshino’ is a go-to plant when it comes to screening. It does fine in partial shade, can gr ow up to three feet a year, and is elegant in form. I consider it far superior to Leyland Cypress, a plant plagued with issues. Deer like to rub the trunks when they are in rut, so precautions should be taken with young plants. Who wouldn’t want to smell like a
cedar?
While traveling on plant expeditions in Oregon, I became more familiar with the wide range of Cryptomeria cultivars. I have used them extensively in my design work since, and several have found a home in my garden. The species does well on my land as it holds moisture, drains well, and the soil is deep. Cryptomeria are not happy in dry, windy situations, but they thrive in more sheltered locations. Ground moisture and good drainage seems to be the key. This is why the species has been so satisfactory in the Azores archipelago. They produce a crop of timber there in just thirty-five years. I have spent time in the Azores, islands far in the Atlantic, often swept by drenching rains. The Japanese Cedar wood is very rot resistant and has a fragrance like our native Red Cedar (Juniperus virginiana.) It is used in many applications.

A favorite cultivar, ‘Knaptonensis’, was found as a witches broom on an Italian island in Lake Maggorie in 1930. This is truly a dwarf plant with juvenile foliage that is white and cream. It needs to be sited in a location out of hot afternoon sun, as it will scald the white foliage. It’s irregular in form and upright. I cut it back some to add its foliage to winter wreaths and it responds well to the treatment.

‘Sekkan-sugi’ is a golden form. The new growth is intensely yellow, slowly fading to green. One grows next to my front gate, glowing like a beacon in the spring. It takes well to heavy pruning. Smaller than the species, it still can reach over thirty feet tall and fifteen feet wide.

‘Cristata’ grows fifteen to twenty feet in height and is noted for its crested, fasciated foliage. I have one growing in amixed border. It helps separate two sections of the garden with its quirky statuesque presence.

There are many known cultivars. For further exploration read this scholarly work: Descriptions and a Key to Cultivars of Japanese Cedar Cultivated in the Eastern United States, by Robert J. Rouse, Paul R. Fantz, and Ted E. Bilderback

Consider giving one of these fine conifers a try! Happy gardening.

originally published in our Spring 2017 newsletter