Yews (genus Taxus) provide good illustrations of the rules for scientific notation of cultivated plant names. I hope trying to sort nomenclature out for the reader will help me get it straight in my own mind.

Gardeners have grown forms of the long-lived English yew, Taxus baccata, and the hardier Japanese yew, Taxus cuspidata, for centuries. Both binomials show standard scientific notation, with genus written first and capitalized, species written second and not capitalized, and both genus and species italicized.

A 1960s nursery where I worked grew conical plants labeled Taxus cuspidata capitata. The third italicized word indicated a variety, a form growing true from seed but distinct from the typical form of its species. However, botanists pointed out that the typical form of the species cuspidata was also somewhat conical, so the plant previously known as the variety capitata was demoted to a cultivar, Taxus cuspidata ‘Capitata.’ Cultivars are plant forms that are reproduced by cuttings or other vegetative means, generally because they don’t grow true from seed. In scientific notation, cultivar names are written in non-italicized or roman type, first letter
capitalized, within single quotation marks.

Growers hoping to combine ornamental merit with hardiness have crossed English and Japanese yews and dubbed the results Taxus x media. The roman “x” after the genus name indicates a hybrid of species within that genus. Taxus x media plants grown from seed vary considerably. Growers propagate interesting plants by rooting cuttings. If the resulting plants display desirable traits, growers may append cultivar names. For example, a favorite yew from my nursery days was the Hatfield yew, Taxus x media ‘Hatfieldii,’ a cultivar that arose from a hybrid.

Sometimes a plant produces a branch that looks very different from the rest of the plant, perhaps because of a mutation affecting gene expression. The unusual branch is called a “sport,” and the parent plant is said to have “thrown a sport.” If rooted successfully, sports may result in new cultivars.

My wife instigated a 2017 trip that got me thinking about yew nomenclature while bringing us to the original Irish yew, Taxus baccata ‘Fastigiata,’ a cultivar of English yew. ‘Fastigiata’ means upright. Farmer George Willis found two unusual English yews with upright branching in 1767. He kept one and gave the other to the owner of an Ulster estate called Florence Court. George’s plant died in 1865, but the other plant lives on. This original Irish yew, pictured behind me at Florence Court, has become less upright with age and the effects of thousands of cuttings having been taken from it. The other photo shows me admiring a younger Irish yew next to the Florence Court gardener’s cottage.

Yews have lost some favor in American gardens because deer browse their foliage. However, yew species and hybrids have given rise to cultivars that remain superb ornamental plants for sites where deer may be excluded, plants that may give much pleasure even if their nomenclature seems arcane.

originally published in our Spring 2018 newsletter 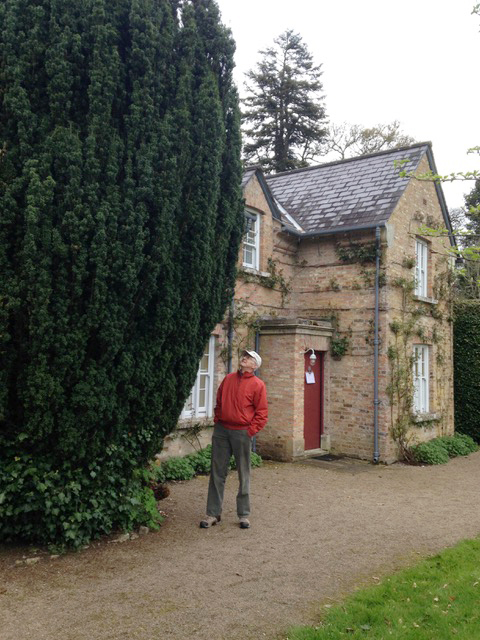 The author with a fine specimen of Irish yew at Florence Court. This plant showed no signs of having been sheared. 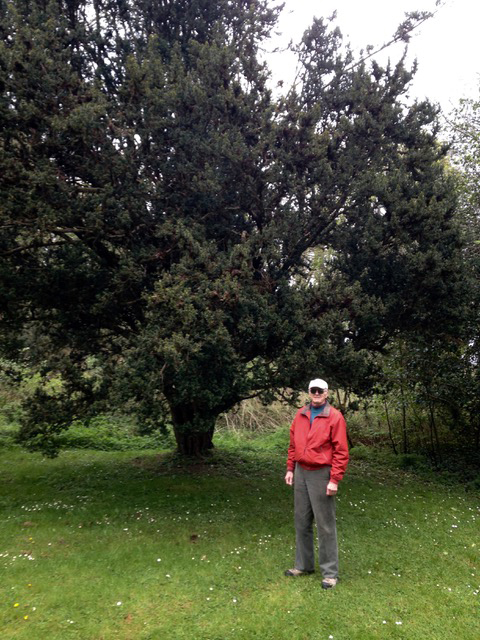