What’s New in Our World of Plants 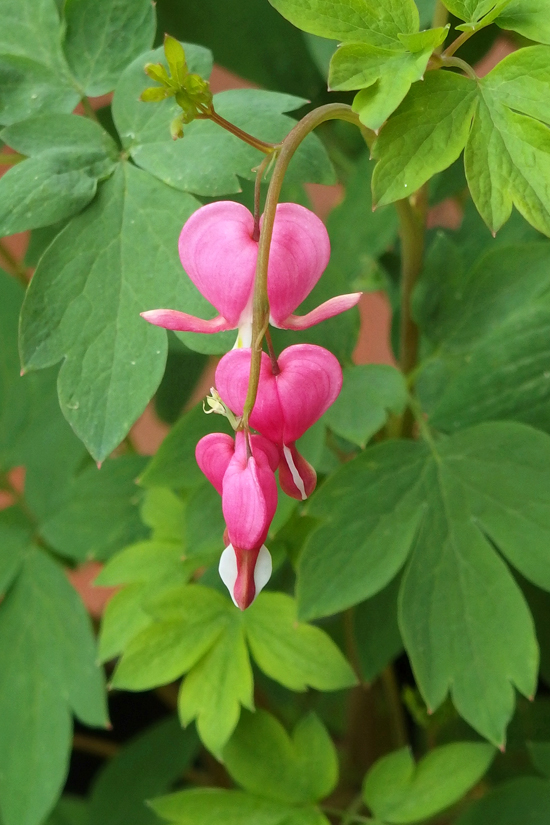 Lamprocapnos spectabilis, Common Bleeding Heart. Photo by Dave Smaldone
Another growing season is upon us and the Garden is coming to life. The few days of warmth we have had are not only deeply appreciated but allow the waiting buds to come to life. Dicentra cucullaria, Dutchman’s Breeches, are common here in the Garden. They are special to me, with childhood memories of them in New Jersey forests. Their glaucous foliage (blueish) and white flowers come to life with the onset of the growing season. In our cultivated gardens, Lamprocapnos spectabilis, formerly Dicentra spectabilis, Common Bleeding Heart, can be found. It too holds a special place in my mind as it grew abundantly in my parents’ garden. It is native to Siberia, Northern China, Korea and Japan. Bleeding Heart is indeed a hardy species, one of the many plants we grow from Asia. They both are early to appear in the garden and are often dormant by July, allowing room for later-blooming plants.
A Tree Peony collection that was given to us last fall has made the journey without missing a beat. In mid-April they are flush with foliage and fat buds can be seen. They can be viewed at the upper and lower parking areas. Of note: deer do not bother with this family of plants.
Several families have made memorial gifts to the Garden in honor of those recently departed. This is allowing us to create a significant planting between the dam breach and the entrance at Imperial East. We call this area of the Garden the Long Walk. At one time it served as the dam for the Tibbs Run Reservoir, and it is the only straight section of the Reservoir Loop Trail. The old reservoir can be viewed on one side, a small stream on the other. Six beautiful new urns will be placed in this garden, adding a repeating architectural form to the space. Several teak benches will be placed to take in the views of the basin. Cold-hardy Survivor Camellia, Fritz Huber & Korean Gold Plum Yew, Limelight & Snow Queen Hydrangea, Variegated Holly, Scarletta Leucothoe, Mahonia bealei and the cold hardy Magnolia Bracken’s Brown Beauty are some of the woody plants that can be found. Many forms of Carex, ferns, woodland Phlox, Jacobs Ladder, and Heuchera Autumn Bride will add their texture and bloom to this serene area. This falls bulbs will be tucked within the herbaceous perennials. Last year this area was enhanced with a collection of donated woodland Azalea.
Come and explore. Enjoy the energy of spring. Every day is unique.

originally published in our Summer 2018 newsletter